Browse through our Medical Journals...

GLOBAL CLINICAL CHANGE: DIFFERENCES BETWEEN THE PATIENT'S AND THE CLINICIAN'S ASSESSMENT THROUGHOUT THE TREATMENT OF A DEPRESSIVE EPISODE

The better understanding of the relations between the subjective assessment of the course of the illness, or the change experienced with the treatment and the clinician evaluation has important implications from a clinical perspective. If the information regarding the agreement of both assessments is not taken into account, mistakes or inaccuracies may emerge from the evaluation of therapeutic results. Some studies with depressive patients have found that the correlation between self-assessment (BDI, Beck Depression Inventory; Beck et al, 1961) and clinician's assessment (Hamilton Rating Scale for Depression; Hamilton, 1967) were weaker at baseline than when the patient was discharged (Bailey and Coppen, 1976; Martinsen et al, 1995). The lack of insight of these patients and their pessimistic view might lead them to poorer evaluations, resulting in a low reliability of the exclusively subjective assessment (Bobes, 1997). However, as it is shown by some studies about quality of life (Wells et al, 1989; Hays and Wells, 1995), this same bias seems to exist in patients with serious illnesses.

Kwoh et al (1992) point out that the clinicians and their patients with rheumatoid arthritis often disagree in their assessment of the degree of physical and mental impairment that the patient experiences. In their study, the weighted kappa statistic was 0.39 for physical functioning and 0.30 for mental functioning. Nowadays, there are not precise enough parameters regarding the suitability of self-assessment in the several psychiatric disorders, in the different stages of the follow-up, or with regard to the clinician's assessment. This study aims to examine the differences between self-assessment and clinician's assessment throughout the treatment of a depressive episode. Specifically, the clinician's and the patient's assessments were compared, regarding the global change experienced throughout every stage of follow-up, with a total of 3 assessments in a 6-month treatment period.

In a multicentric, prospective, observational and open-label drug surveillance study of the antidepressant drug citalopram (Menchón et al, 1997; Corominas et al, 1998 (a, b), the scores on the Clinical Global Impression - Change Scale (CGI; Guy, 1976) were recorded. This is an observational scale of global evaluation, which assesses the change in degree of illness in relation to the original assessment. It can be applied to any type of patients, regardless of the diagnosis. The scale has only one item that measures global change of the illness (improvement or worsening) by the clinician and by the patient, separately, on a 7 point scale from 0 to 6, becoming a valid, reliable and widely used instrument (Bech et al, 1993).

Subjects were 1138 patients with major depression according to ICD-10 criteria who completed a follow-up period of 24 weeks. All were aged over 50, so it was intended to focus the study on patients with higher comorbidity and consumption of other drugs. Patients were included in the study consecutively by the psychiatrists, assigning treatment with citalopram (adjusting the doses openly and individually according to the clinical response and the side effects). The patients were interviewed again after 4, 8 and 24 weeks (independently of the follow-up visits that each psychiatrist considered appropriate). The scores on the CGI-Change (patient's and clinician's assessment), the Montgomery-Asberg Depression Scale (Montgomery and Asberg, 1979) and the UKU's Side Effect Scale (Lingjaerde et al,1987) were recorded at each interview.

Statistical analysis Descriptive analysis of the baseline characteristics of the sample, according to the demographic and clinical variables, and the scores in the above-mentioned scales, using absolute and relative frequencies and central tendency and dispersion measures were performed. To examine the differences between the clinician and the patient in the assessment of change, we grouped the patients that experienced an improvement (scores 1, 2 or 3, that stand for "very much improved", "much improved" and "minimally improved", respectively) in each of the follow-up interviews according to the clinician's and the patient's assessment, after 4, 8, and 24 weeks of treatment. The statistical analysis of the nominal values of this new variable (clinical improvement versus no clinical improvement) was carried out with the Chi-square test.

A sample of 1,138 patients that completed a 6-month follow-up while being treated with citalopram was studied. Main social, demographic and clinical characteristics of the patients are shown in table 1.

TABLE 1.
Demographic and clinical characteristics of the sample
(N= 1138 patients)

The distribution of the percentages for each of the 7 points of the Clinical Global Impression - Change scale, throughout the successive follow-up visits, and according to assessments made by patients and by clinicians, is shown in table 2. 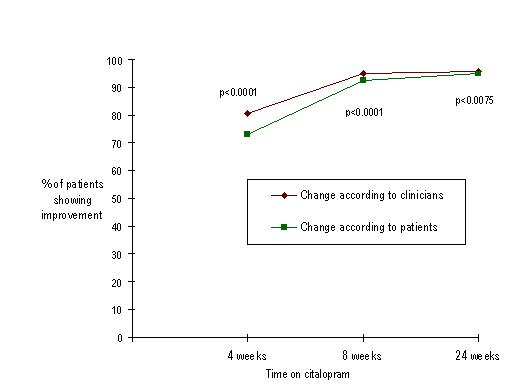 Both the type of instrument and who is going to perform the assessments are key aspects when examining clinical change or improvement. The validity of the studies that aim to test the effectiveness or the results of a specific treatment may be questioned if the assessment is based only on one source or if the concordance between instruments and assessing subjects is not taken into account. This study shows that assessments made by patients and by clinicians show some differences, particularly when a definite improvement of depressive symptoms has not yet appeared in a substantial number of patients (after one month of treatment). This finding suggests that the differences are largely due to the bias of a more negative self-assessment until the depressive episode has been controlled. The findings of previous research suggest that there is small congruence between measures coming from different rating sources, both in relation to the instrument as well as the assessing subject. Thus, a poor concordance has been found between the patient's self-assessment and the clinician's assessment (Clark and Friedman, 1983; Bell et al, 1986; Conte et al, 1988; Sullivan and Grubea, 1991). Piersma et al (1995) did not find significant relationships between symptom distress reported by patients (according to the Brief Symptom Inventory) and global functioning rated by clinicians (according to the Global Assessment of Functioning Scale). If we specifically consider the evaluation of clinical change, Fischer et al (1996) showed that the traditional instruments used to measure the clinical change in rheumatoid arthritis (comparison throughout time of the scores in pain and disability scales) scarcely correlated with the perception of change by the patient. In addition, the patient's satisfaction was directly related to his perception of clinical change, and not with the standardised measures assessed by the clinician. Moreover, patient perception of change was also shown to be at least as sensitive to change as the traditional measures. The results of our study are perhaps more consistent since the same scale was used by patients and clinicians alike to assess changes. Thus, even under these conditions, it seems that monitoring the clinical response should not rely on one only subject's evaluation or one only instrument. We would also like to highlight that the differences between patients' ratings and clinicians' ratings tended to disappear when treatment was continued, in parallel with the improvement of depressive episodes in most patients completing follow-up. This suggests the need to a longitudinal approach in the evaluation of the insight, self-assessment and clinical change in psychiatric disorders.

Bailey, J. & Coppen, A. (1976). A comparison between the Hamilton Rating Scale and the Beck Inventory in the measurement of depression. British Journal of Psychiatry 128, 486-89.

Bell, M., Billington, R. & Becker, B. (1986). A scale for the assessment of object relations: Reliability, validity and factorial invariance. Journal of Clinical Psychology 42, 733-741.

Piersma, H.L. & Boes, J.L. (1995). Agreement between patient self-report and clinician rating: concurrence between the BSI and the GAF among psychiatric inpatients. Journal of Clinical Psychology 51 (2), 153-157.

Sullivan, C.W. & Grubea, J.M. (1991). Who does well in a day treatment program? Following patients through 6 months of treatment. International Journal of Partial Hospitalization 7(2), 101-107.

World Health Organisation. (1992). The ICD-10 Classification of Mental and Behavioural Disorders. WHO: Geneva.