The 2020 lockdown policy, to control and limit damage of a coronavirus pandemic, was largely adopted globally, as a public health intervention.

The policy in the U.K. was adopted from March to July 2020, (approximately) and was, without doubt, the most expensive public health intervention ever undertaken in the U.K. The associated costs will include a furlough costs, social benefits, lost revenue from workers and business, unemployment, impacts on health through delayed surgery etc. A full bill of costs has yet to be added up, but public borrowing incurred as of July 2020 is estimated to exceed £360 billion. The UK’s universal health scheme, the NHS, costs £140 billion to run every year. The costs of borrowing for 2020 alone would exceed the cost of running the entire NHS for 2.5 years.

We need to consider whether the investment in this health intervention has been a wise investment.

What have been the health outcomes associated with lockdown?

This is difficult to ascertain at this time, but there is evidence to indicate that the relevant coronavirus, COVID-19 has been triggering cases of infection in various countries since at least December 2019. The virus has therefore been widespread for over six months, and largely international numbers of cases and deaths have peaked and fallen, with countries like the UK leaving lockdown.

One widely available measure of outcome would be to look at deaths reported as a result of COVID.

There are limitations to this approach, but prevention of death is obviously a key desire for the public, and unquestionably one of the aims of the lockdown. [If not, then what other purpose might there be? A desire to avoid overwhelming the NHS might an early aim of lockdown, but the Nightingale field hospitals were never filled, and some left unoccupied - untroubled by a surge in cases that never came.]

Mortality figures, death rates, whatever you call them are absolute and feasibly quantifiable measures. Other measures, such as morbidity, often require qualitative methods of measurement e.g. prevalence of PTSD.

A limitation to that would be that most countries adopted a lockdown process and few did not.

As lockdowns are a novel health initiative a country could perhaps use its past experience of epidemics as a comparative method. That is using an earlier version of itself as a control.

There exists a potential control in the European H3NS epidemic of 2014/15.

Across the 28 EU Member States, there was an excess mortality corresponding to 217 000 deaths - just among their 94 million elderly citizens (65 years of age or older).

Most mortality figures from this time were collected over a three-month period (December-February), and so only record three months’ exposure to the virus. Often papers are focussed on the eldelry population. This contrasts with death figures for COVID which have been counted and reported over a longer period and combined across age ranges.. We could therefore, (if the H3N2 and COVID viruses were equally lethal) expect the mortality rate for 2020 to be significantly higher than 2014/15. That COVID was not ‘simple flu’ and had a higher lethality was a concern that triggered lockdown.

The figures are derived from official national sources and are publicly available.

We consider England and Wales, France, Sweden, Belgium, Italy, Denmark, and The Netherlands. 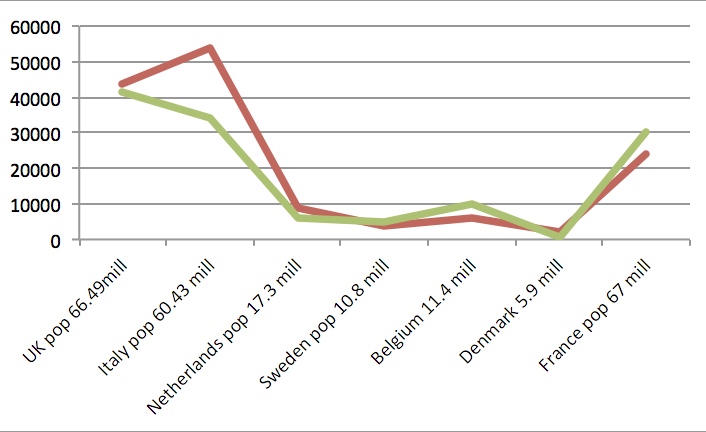 Figures for England and Wales, Italy, Netherlands and Sweden are presented for both the 2014/15 epidemics across Europe vs figures for COVID in June 2020. Of note is that Sweden did not have a lockdown.

You are invited to repeat the process by visiting references below and verifying the rates, and then running your own t test for calculated rates of deaths/million.

The flu epidemic in the winter of 2014 / 2015 lasted 21 weeks and as such was the longest epidemic ever recorded in the Netherlands. Nearly two million people suffered from flu-like symptoms. About 10,000 people were hospitalised for complications from flu, such as pneumonia. During the flu epidemic period, more than 65,000 persons died in the Netherlands; this is approximately 8,600 persons more than the expected number of deaths in this 21-week period.