Progress in dentistry has led to a plethora of materials and treatment options becoming available. Conservation of teeth for longer periods has also brought forth associated problems such as root fractures. Vertical root fractures are usually characterized by an incomplete or complete fracture line that extends through the long axis of the root towards the apex. Vertical root fractures represent between 2 to 5% of crown root fractures1, with greatest incidence occurring in endodontically treated teeth in patients between 45 to 60years of age2.
The predisposing factors are the loss of tooth material, anatomy of the susceptible teeth, previous dentinal cracks, habits like bruxism and clenching. Physical trauma is the most common cause for tooth/root fracture in vital teeth. In endodontically treated teeth, the primary pre-disposing factors are iatrogenic in nature. They include:
• Excessive canal shaping
• Excessive pressure during compaction of gutta percha
• Excessive length and width of post space in relation to tooth’s anatomy and morphology
• Excessive pressure during placement of the dowel
• Improper choice of tooth for bridge abutment
This case report describes a vertical root fracture of the right mandibular first molar, which presented with features of a periodontal abscess.

A 54 year old male patient was referred from the department of Endodontics to the specialty clinics of Periodontics, Sri Ramachandra Dental College, SRMC&RI, for opinion regarding the persistent gingival swelling and pain in relation to an endodontically treated and crowned lower right first molar. A comprehensive medical and dental history was taken. The patient was found to be a Type II diabetic, under medication for the past ten years.
On clinical examination, he presented with a red, soft, diffuse gingival swelling involving the facial and lingual aspect of the mandibular right first molar (46). A purulent exudate was elicited on digital pressure. The tooth was tender on percussion and exhibited grade II mobility. A localized probing depth of 8mm (mid- buccal) & 7mm (mid-lingual) was recorded. The above clinical features were consistent with the diagnosis of a periodontal abscess. On radiographic investigation, the Intra oral peri-apical radiograph revealed radiolucency at the furcation and widening of the periodontal ligament space in the distal root of 46. A diffuse radiolucent area was noted, surrounding the mesial root of 46.
To alleviate the symptoms of the patient, an immediate drainage of the purulent exudate through the pocket was done, following which the patient was placed under an antibiotic regimen for five days. Three days after the initial visit, a thorough oral prophylaxis and Root planing in 46 was performed. At the recall visit two weeks later, a sufficient resolution of the clinical signs of inflammation was not present, but a reduction in mobility to grade I was evident. To make the site more amenable for surgery, Tetracycline fibers* were placed locally in 46. The vitallium jacket crown was removed prior to flap surgery. An envelope flap was reflected and the affected area was thoroughly debrided. An incomplete vertical root fracture extending in the buccolingual direction, involving the mesial root of 46 was detected. A V shaped osseous defect extending to the apex of the mesial root of 46 and bone loss in the furcation area was also observed.
As a sequel to this finding, a hemisection of 46 was carried out and the mesial half of the tooth was removed. Synthetic hydroxyapatite** was grafted in the bone defect and interrupted sutures were placed across the edentulous space. The surgical site was covered with a periodontal dressing†. Three weeks following surgery, complete healing in the surgical site was observed. Six months later, intraoral periapical radiograph showed complete regeneration at the grafted site and a full ceramic bridge was fixed using 45, 46 (distal half) as abutments. 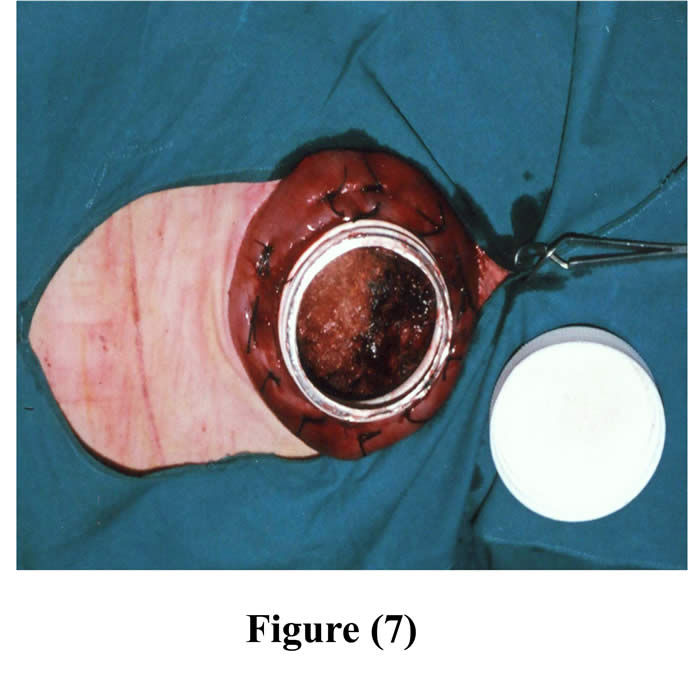 Vertical root fractures pose a frustrating problem to the patients as well as the dentist because they are difficult to diagnose during the early stages. The case described here is a vertical root fracture masquerading as a periodontal abscess. Early diagnosis of the vertical root fracture is based on both clinical and radiographic findings. However, the clinical findings are varied and nonspecific. They include discomfort/pain while biting/chewing, noticeable gingival swelling, and presence of a sinus tract or a deep narrow isolated pocket along the surface of the tooth. Tamse et al3 has reported 36.7% of “halo” and 28.6% of “periodontal” radiolucencies involving periradicular areas around vertically fractured mesial roots of mandibular molars. In this case, the “halo” like radiographic appearance around the mesial root of 46 was observed, which is in concordance with the previous reports. The V shaped resorption pattern facing the fracture line was also in par with findings reported by Lustig et al4.
In the past, vertical root fractures were considered to have a hopeless prognosis and were extracted. In recent times, several treatment options have been tried out including use of composite resin cement5, Mineral Trioxide Aggregate6, and silver glass ionomer cement7 for bonding the fracture line. The above mentioned treatment methods have limited success rate in the presence of a weakened periodontium. The most predictable treatment alternative is hemisection8 followed by fixed prosthesis. Therefore, early and correct diagnosis is imperative, as delay will result in rapid loss of supporting bone and eventually tooth loss.