An Unusual Cause Of Mediastinal

Phenytoin-induced lymphadenopathy was first described in 1940 by Coope and Burrows.

Since then, there had been various case reports concerning phenytoin manifestations. We report a case of a 40 year old woman who presented with bilateral hilar and mediastinal lymphadenopathy 8 years after taking phenytoin. Biopsy showed normal lymphoid tissue with no evidence of granulomas. The hilar and mediastinal lymphadenopathy resolved 2 months after cessation of phenytoin.

for assessment of an abnormal chest X-ray (CXR) which demonstrated bilateral hilar and mediastinal lymphadenopathy. The CXR was performed after she complained of

wrists, knees and ankles. She also revealed that she was short of breath after walking for 10-15 minutes. Her background history included epilepsy, depression, osteoarthritis and migraine. Her medications were flurazepam, venlafaxine, clonazepam, phenytoin, and levetiracetam. She had been seizure free for the prior 8 years. She was a lifelong nonsmoker. 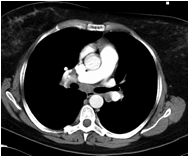 Examination revealed a heart rate of 72 beats per minute, BP 116/75 mmHg and

SpO2 96% on room air. Chest auscultation was clear with normal heart sounds. There was some bruising noted on both legs. The presumptive diagnosis at that point was

Bloods were normal including serum calcium. Serum ACE level was 47 (give

discussed at the weekly multi-disciplinary radiology meeting. The consensus was that she had sarcoidosis radiologically. Bronchoscopy with transbronchial biopsy was performed.

No endobronchial lesions were seen. Biopsy demonstrated normal tissue cells with no

evidence of granulomatous inflammation. As she was seizure free for the last 8 years, the phenytoin was stopped. Two months later, she had repeat CXR which showed

improvement of the hilar adenopathy. This was confirmed by CT thorax which showed

complete resolution of the mediastinal lymphadenopathy.

Phenytoin use has been associated with various lymph node abnormalities. Four

distinct categories of lymphadenopathy have been described: lymphoid hyperplasia,

association with the use of hydantoin derivatives such as phenytoin was first described in 1940 by Coope and Burrows2. In 1959, Saltzstein and Ackerman3 reviewed 75 cases and reported a further seven patients, two of whom subsequently died 5 years later due to lymphoma. In 1966 Hyman and Somers4 reported 6 patients on anticonvulsant therapy who developed a histologically proven Hodgkin’s lymphoma or lymphosarcoma. Games5 et al. reported a case in which phenytoin induced lymphadenopathy regressed after cessation of therapy.

More recent publications divide these occurrences into two; the anticonvulsant

anticonvulsant hypersensitivity syndrome generally develops within eight weeks after the drug is first prescribed6. The presenting symptoms are fever and malaise in most

is considered to be a late effect of phenytoin therapy, which can occur years after

initiating treatment, as in our case study6.

Evaluation of patients who develop enlarged lymph nodes while receiving

phenytoin therapy should be done carefully so that phenytoin-induced lymphadenopathy

given7. John et al6 describe a case of phenytoin-induced pseudolymphoma in which the

flow cytometry analysis of peripheral blood and bone marrow mononuclear cells detected identical T cell population with an aberrant immunophenotype6. In addition to that, a T cell receptor beta gene was found to be clonally rearranged in both peripheral blood and bone marrow, supporting a clonal origin of atypical T cells6. However, this clonal population of T-cells could not be detected in a pathologic specimen obtained from excisional biopsy of patient’s cervical lymph nodes6. After discontinuing the patient’s phenytoin, lymphadenopathy had nearly completely resolved and the circulation clonal T cell population had disappeared at re-evaluation 12 months later.

receptor genes in establishing the lineage and clonality of lymphoproliferative disorders

in the assessment of dermatopathic lymphadenopathy

The mechanisms underlying the development of lymphadenopathy in patients

treated with phenytoin are not completely understood6. With regards to the anticonvulsant hypersensitivity syndrome, it has been proposed that abnormal detoxification of reactive metabolites of phenytoin, possibly arene oxide metabolites produced by cytochrome P450, is responsible for the syndrome6.

Cessation of phenytoin have been documented to resolve the lymphadenopathy.

Steroids may be helpful in cases of resistant lymphadenopathy.

On conclusion, the pathophysiology of phenytoin-induced lymphadenopathy is

incompletely understood. It can require careful pathological scrutiny to differentiate it

from monoclonal cell expansion. Given the number of patients regularly using phenytoin, it is an important clinical entity that general physicians need to be cognisant of.