This work was carried out in:

Current address of the authors:

Clinical signs, radiologic findings and diagnostic procedure in a case of canine heartworm disease found in Qatar but probably imported are described in this clinic case.

Dirofilaria immitis is a mosquito-borne zoonotic filarial nematode that lives in the heart and pulmonary vessels of dogs, foxes, wolves and other carnivores causing the heartworm disease. D. immitis is widely distributed in the canine population of Mediterranean and Middle Eastern countries, including Egypt [1] and Turkey [2]. It also occurs in the north-western part of Iran [3].

Subcutaneous dirofilariasis due to Dirofilaria (Nochhtiella) repens has been occasionally recorded in the Arabian Peninsula in both humans [4] and dogs [5] but autochthonous cases of D. immitis have never been recorded so far in the region, perhaps due to the absence of specific vectors or the presence of unsuitable environmental conditions. Consequently we want to report a case of clinically manifested D. immitis infection in a dog born in Syria and imported to Doha (Qatar) in 2010.

A 20-month old female Saluki dog with 1-week history of lethargy, poor appetite, cough and weight loss was presented for consultation in March 2010 to a veterinary practice of Doha (Qatar). Physical examination revealed absence of fever, heart sounds muffled, but no evidence of heart murmure. 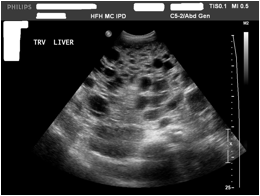 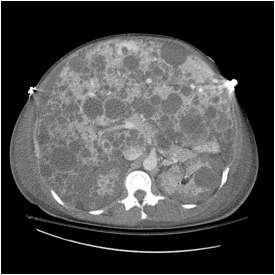 Biochemistry and haematology blood test results were within normal ranges with the only exception of a diminution of serum albumin. Serological testing was performed using a rapid assay test system (IDEXX SNAP® 4Dx®) for Ehrlichia/Anaplasmosis/Borreliosis and Heartworm, which resulted positive for D. immitis and 3 immitis microfilariae (Figure 3) were identified by light microscopy (x200) using the Knott modified test. The association of serology and concentration tests is important in the diagnosis of heartworm in non-endemic areas, improving the accuracy to at least 95% [6]. The dog had been imported 8 months before from Syria.

The site of origin of this case could not be trace back, but was estimated to be probably Syria and not Qatar since no autochthonous case of heartworm disease due to D. immitis has ever been described in the Gulf area [5, 8].

Moreover Syria is a Mediterranean country and it borders south-east Turkey, where the incidence of canine hearworm has been recorded as high as 26% in the neighboring province of Hatay [2].

The existence of a prepatent period of 5-6 months for the development of adult worms in the cardio-vascular system, after an infective female mosquito bite and before manifesting clinical signs, also accounts for the hypothesis of origin in Syria oof the clinic case [7].

However, no previous record of canine heartworm from Syria could be retrieved from existing scientific literature. Here resides in our opinion the importance of such a finding, because no autochthonous or imported case has ever been recognised till now either in Syria or Qatar.

Based on the owner report the dog lived only in these two countries, so the infection must have originated in one or the other. Cases of canine subcutaneous dirofilariasis due to D. repens have been described in the Gulf countries, including Kuwait, Saudi Arabia and Dubai [5] where human cases also have been reported [4].

However, thus far, no case of D. immitis infection has been described in the Gulf States either in dogs [5] or humans. This is in accord with the notion that geographic distribution of human dirofilariasis follows the distribution of animal dirofilariasis [5]. Dogs, cats and wild carnivores, in fact, are the final hosts of D. immitis and constitute the only source of accidental infection to humans, in the presence of a competent population of mosquito vectors [5, 7].

The last 20 years have seen a slow spreading of D. immitis to new areas, assumed to be the consequence of climate changes, global warming, increase numbers of mosquitoes and their colonization of new regions together with increased pet travel [7-8]. The present case seems to confirm this trend providing further information on the diffusion of this zoonotic vector-borne parasite into new areas of the Middle East.

[8] Tarello W (2011) Clinical aspects of dermatitis associated with Dirofilaria repens in pets: review of 100 canine and 31 feline cases (1990-2010) and a report of a new clinic case imported from Italy to Dubai. Journal of Parasitology Research, accepted for publication on 22 September 2011.