AN UNUSUAL CASE OF PSOROPTES CUNICULI IN A RABBIT

The rabbit was a female 5 year old black domesticated rabbit.

The rabbit was presented because of excessive scaling around the perineum and ventrum. It was lethargic and anorexic.

The animal had been presented a month earlier with crusting lesions in the ears which had been treated with 0.5% diethanolamine fusidate (Canaural,Leo). This had apparently resolved the problem in one week. The owner had noticed a few days before presentation that the rabbit was lethargic and noticed the crusting lesions after turning the animal onto its back.

No abnormalities apart from the dermatological ones were seen. A dermatological examination demonstrated 2 separate crusting lesions: one around the perineum and one in the mid-ventrum area. These areas were pruritic and painful to the rabbit. Anaesthesia using a combination fentanyl citrate/fluanisone (hypnorm, Janssen) & diazepam (generic) was performed at a dose rate of 0.3mL/kg i.m.+2mg/kgi.p. respectively.There was a strong odour from these crusting lesions. The crusts were removed to reveal an intensely erythematous, alopecic area. 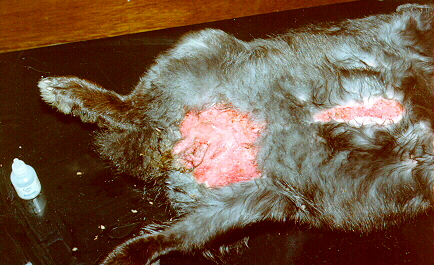 Photograph of the erythematous region after the crusts were removed.


Laboratory and other diagnostic tests

A diagnosis of Psoroptes Cuniculi infestation was made. The prognosis was good since treatment was given in the winter.In the summer months fly strike is a possible complication but it was not a factor in this case.

Ivermectin has been shown to be highly effective against Psoroptes Cuniculi. (Wilkins et al 1980). The owner was advised to burn all the rabbit's bedding and disinfect and rinse the hutch well. She was asked to represent the animal in 18 days for inspection and a 2nd injection of ivermectin since the life cycle of P. Cuniculi is 3 weeks (Sweatman, 1958)

The rabbit had improved greatly over the 18 day period. It was much more lively and there were no pruritus, crusts or erythematous lesions around the perineum and ventrum. Hair brushings were negative on microscopic examination.

Treatment with ivermectin seemed to be 100% effective in reducing the psoroptic mite population. Careful cleaning of the hutch was also performed to try to reduce any possibility of te-infestation from the environment. However, it is nearly impossible to remove all dander and dust from around the hutch. The distribution of the lesions and the non-involvement of the ears were also interesting. The standard texts do not mention non aural involvement (Beynon and Cooper, 1991 ). There is a report of two cases where pruritus and erythema affected face, ventrum and genitalia similar to this case (Yeatts,1994).