Plastic bronchitis, a rare but well known disorder was first described in 1902 . It is associated with many pulmonary and nonpulmonary conditions in which bronchial casts which resemble bronchial anatomy are produced.

We present a 4 ½ year old girl with congenital heart disease status post Fontan repair who was admitted repeatedly with respiratory distress and was diagnosed preterminally with plastic bronchitis. Here we review the likely pathophysiology as well as standard and experimental treatment modalities on the basis of an extensive literature review.

The patient was born through a full-term normal spontaneous vaginal delivery with no known complications.  The diagnosis of a Double Inlet Single Ventricle with L-TGA was made at four months of age when she presented to the inpatient service with mild respiratory distress.

She was referred for her first cardiac catheterization at 5 months of age which revealed  increased pulmonary blood flow with a Qp: Qs ratio of 4.2:1 and a mean pulmonary artery pressure of 50 mmHg with a pulmonary capillary wedge pressure of 18 mmHg. Pulmonary vascular resistance was 3 Wood units.  The patient  underwent a pulmonary artery banding procedure at 6 months of age.  She subsequently underwent a bi-directional cavo-pulmonary (Glenn) shunt procedure at 14 months of age. At 3 ½  years of age, a lateral tunnel fenestrated Fontan was performed. Post-operatively, she developed a persistent right sided pleural effusion. Catheterization 6 months post-operatively revealed a normal pressure in the Fontan circuit, cardiac index of 3.6 litres/minute/m2 and no significant obstruction in the branch pulmonary arteries.  The gradient across the bulboventricular foramen in the subaortic area was under 20 mmHg. The pulmonary vascular resistance was 2.5 Wood units. Angiography demonstrated the Fontan fenestration was patent and unobstructed. Angiography in the ascending, thoracic and abdominal aorta showed multiple small collaterals in the right lung including the intercostal arteries, which were occluded by Coil embolizations. Over time, with aggressive diuretic therapy and chest physiotherapy, her pleural effusions improved. On discharge, her EKG demonstrated sinus rhythm and the echocardiogram revealed normal ventricular function and a patent fenestration with right to left flow and no pericardial effusion. However, within a month, she again developed increasing respiratory distress, a decreased oxygen saturation levels and radiographic evidence of a large right-sided pleural effusion with areas of atelectesis and/or scarring.

Over the next 6 months, she continued to have recurrent right-sided pleural effusions associated with respiratory distress requiring chest tube insertions. She also developed a chronic cough that was associated with expectoration of pearly white stringy materials that were later confirmed by microscopy to be bronchial casts (Figure 1).  The casts were composed of mainly fibrin, mucus and scattered lymphocytes and macrophages and a culture from a representative cast was negative. A diagnosis of plastic bronchitis was made in association with the Fontan physiology. She was treated with antibiotics, steroids, albuterol and N-acetylcysteine nebulizations, oxygen and vigorous chest physiotherapy. The patient was scheduled to undergo an elective bronchoscopy to remove large bronchial casts and thoracoscopy to lyse any long-standing adhesions and to re-expand the collapsed portions of her lung. However, before the patient underwent elective bronchoscopy, she developed acute respiratory failure requiring intubation and ventilatory support.  During this critical period, multiple bronchoscopies were performed to remove thick mucus plugs and bronchial casts. Unfortunately, her clinical condition continued to deteriorate, requiring high pressure ventilation and multiple inotropes.  Finally, this led to her ultimate demise at the age of 4 ½ years, approximately 14 months after her Fontan procedure.

Plastic bronchitis has been diagnosed in a variety of pulmonary pathologies including asthma , , respiratory infections , cystic fibrosis , bronchiectasis 2 and acute chest syndrome associated with sickle cell disease . Interestingly, several non-pulmonary pathologies have also been associated with the diagnosis of plastic bronchitis. These include complex congenital cyanotic heart disease (especially after Fontan procedure), constrictive pericarditis and lymphangiomatosis .

Injury to bronchi and/or impaired bronchial epithelial function may be secondary to inflammation such as in asthma, or infection such as in pneumonia. Impaired epithelial function as seen in cystic fibrosis and bronchiectasis also contributes to the formation and propagation of thick, fibrinous bronchial casts. Infection and inflammation increase the content of fibrin and cellular components in the casts. In addition, bronchial epithelium becomes leaky for interstitial fluid and impairment in the clearing of bronchial secretions occurs.

Impaired lymphatic drainage of the lung may occur secondary to congenital or acquired conditions. Lymphangiomatosis, general lymphodysplasia in Turner syndromes 9, Fontan physiology and constrictive pericarditis have all been associated with impaired pulmonary lymphatic drainage. Lymphatic abnormalities associated with various pediatric cardiac conditions were very well documented by Languepin et al . In that report, abnormal lymphatic circulation was found in all three cases of plastic bronchitis out of that two were associated with cardiopathies. Hug et al demonstrated massively dilated pulmonary lymph vessels, ruptures of lymphatic vessels and the influx of chyle into the alveoli in a patient with Fontan physiology and plastic bronchitis at autopsy. It is well known that the Fontan operation can lead to systemic venous pressure hypertension as well as hepatic congestion, which in turn significantly increases the volume of lymph in the thoracic duct. A retrograde flow of chyle into the lungs and bronchi can occur only when widely dilated lymph channels in the lungs communicate freely with the thoracic duct or with transdiaphragmatic channels . Lymphatic abnormalities and endobronchial chylous reflux in various cardiopathies occurs mainly secondary to surgical trauma to the mediastinal lymph channels, injury causing pleural adhesions and systemic venous hypertension. Plastic bronchitis likely occurs as a result of isolated or combined effects of the above pathophysiologies.

Quite often, both bronchial epithelial dysfunction and impaired lymphatic drainage act in concert to lead to bronchial cast formation and plastic bronchitis.

The treatment of plastic bronchitis is focused on the mechanical removal of the thick bronchial casts and prevention of further cast formation. After an extensive review of the literature, we propose the following treatment modalities:

(1) Removal of bronchial casts and maintenance of adequate ventilation:

The standard of care includes oxygen, chest physiotherapy, bronchodilators, N-acetylcysteine 3 and bronchoscopy. Repeated bronchoscopic aspirations and removal of casts are required in acute cases. Lobectomy has resulted in cessation of cast formation particularly when a specific lobe of the lung is involved in chronic inflammation and subsequent cast production and obstruction.   The uses of t-PA , Recombinant human DNase (rhDNase) and Urokinase have been documented in the treatment of plastic bronchitis. Wakeham et al reported successful long term treatment of plastic bronchitis with t-PA in Fontan patient. The patient was given t-PA every six hourly on long term basis to prevent recurrence of bronchial cast formation.

(2) Treatment and prevention of bronchial inflammation and injury:

Steroids and antibiotics have been used widely to treat plastic bronchitis with certain underlying pathologies. A therapeutic trial of low-dose and long-term oral Azithromycin showed marked clinical and radiological improvement in a healthy patient with plastic bronchitis probably secondary to its anti-inflammatory action.

Surgical ligature of the thoracic duct is considered by some the most effective treatment for chylothorax . Languepin et al demonstrated cessation of bronchial cast formation in one pediatric patient with Fontan physiology after thoracic duct ligation.

Prevention of chyle reflux by improvement of hemodynamics in Fontan patients has been attempted through various interventions. In one case, a permanent pacemaker was placed which resulted in improvement in cardiac function with atrioventricular synchrony and resolution of cast formation.10  Stiller and colleagues described two children with plastic bronchitis following a Fontan procedure. One child was given diuretics to optimize heart function (reducing filling pressures) and the other was given subcutaneous standard heparin. These therapies led to cessation of cast formation in both patients. Percutaneous creation of a stent fenestration in the Fontan circuit resulted in full symptomatic recovery from plastic bronchitis in a patient who had unobstructed Fontan pathways and raised central venous pressure (15 mm Hg). A pericardiectomy showed immediate improvement with cessation of cast formation in a patient with Fontan physiology and secondarily pleural as well as pericardial effusions.7    The endothelin receptor antagonist, Bosentan showed clinical, exercise and hemodynamic improvement in one patient with plastic bronchitis after Fontan.

All reported modalities used to treat plastic bronchitis are summarized in Table 1.         None of the above therapies, however, has proven its efficacy under evidence-based scrutiny, and the prognosis of this condition remains poor. In pediatric patients with plastic bronchitis secondary to Fontan physiology, 45% of the 18 reported cases have died from asphyxia secondary to airway obstruction (Table-2). This current patient died from airway obstruction leading to Systemic Inflammatory Response Syndrome and multiple organ system dysfunctions. Plastic bronchitis in patients with Fontan physiology is life threatening and Pediatricic Intensivists, Pulmonologists and Pediatric Cardiologists should maintain a high index of suspicion in such patients who repeatedly demonstrate respiratory pathology. A low threshold for diagnostic and well as therapeutic bronchoscopy is also warranted. Early utilization of aggressive pulmonary clearance is recommended. Considering the poor prognosis, patients with Fontan physiology who develop plastic bronchitis and fail to respond to treatment should be evaluated early for heart transplantation until a definitive therapy for plastic bronchitis is available.

Treatment and prevention of bronchial injury: 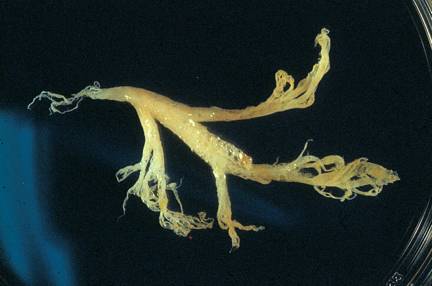 Sponsor Us
this is where the new ad will go